Jorja on my mind… 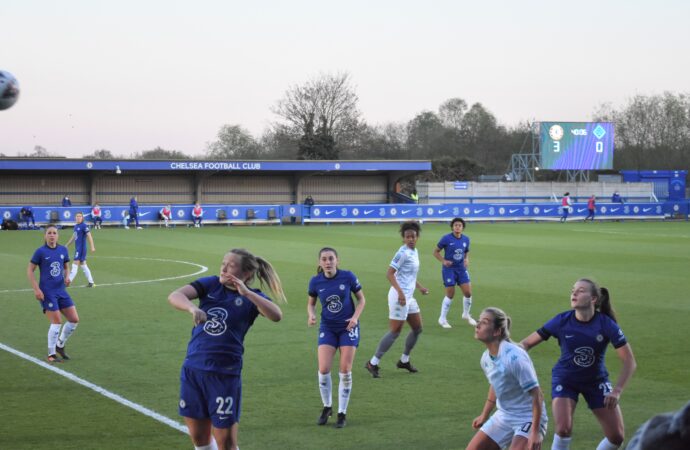 Chelsea Women moved smoothly through to the 5th Round of the FA Cup after scoring a hatful of goals against second-tier London City Lionesses on a chilly Friday night at Kingsmeadow when youngsters, including the impressive Jorja Fox (pictured right, above), were given the chance to shine. The only concern was a knock to captain

Chelsea Women moved smoothly through to the 5th Round of the FA Cup after scoring a hatful of goals against second-tier London City Lionesses on a chilly Friday night at Kingsmeadow when youngsters, including the impressive Jorja Fox (pictured right, above), were given the chance to shine.
The only concern was a knock to captain Magda Eriksson with a quarter of an hour remaining, forcing the Blues captain to go off as a precaution, gingerly making her way off the pitch and straight down the tunnel as Chelsea approach the biggest couple of weeks in their season.
On Wednesday they travel to Manchester to face City in what must surely be the title-deciding game of the Women’s Super League, with just a couple of points separating the two current English giants of the game.
Then it’s the double-header in the semis of the Champions League against Bayern Munich as the Blues close in on the one title Emma Hayes really, really wants to win to bag a key piece of silverware to cap a career that – at 44 – is already one of the most successful in world women’s football. 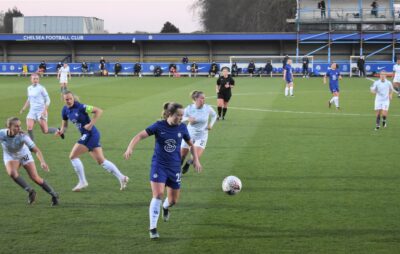 The Lionesses held firm for the first spell of this absorbing cup tie, although the traffic was all one-way. Chelsea camped in the City half and were rewarded for their solid, patient attacking after 22 minutes when Hannah Blundell, back in her familiar role as right back, sent the ball through for Naimh Charles to calmly slot past the onrushing Shae Yanez.
Chelsea’s dominance of the match was such that it was only in the 23rd minute that goalie Carly Telford got her first touch of the ball, and that was from a strategic back pass under no pressure.
With three young players on for the Blues (two – Aggie Beever-Jones and Jorja Fox – making their first career starts) this was a night when a cup upset wouldn’t have been such a shock, particularly as Chelsea could easily have lost focus with massive matches looming.
But Hayes’ professionalism and the team’s togetherness and mastery of passing, led by Eriksson’s commanding presence in the heart of midfield, ensured standards were maintained.
It was 2-0 just before the hour mark. Erin Cuthbert, taking the sixth Chelsea corner of the game (such was the superiority in attack), drifted a ball over into the Lionesses’ area, and – before it touched the ground – Jess Carter let fly with a right-foot volley that flew straight in.
The goals were multiplying. On 35 minutes, Mel Leupolz was teed up by another young Chelsea player, Charlotte Wardlaw. The teenage midfielder slid the ball sideways, and Leupolz’ shot flew 35 yards through the air, curling as it went, past the outstretched fingers of Yanez and into the net (below); a worldie to rival anything Sophie Ingle sometimes produces. 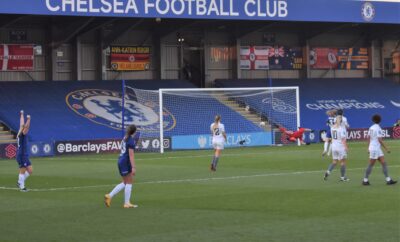 Afterwards Hayes joked that Leupolz and Ingle were having a little internal competition to see who could score the most spectacular efforts. It’s currently a draw!
In the second half, with Beth England and Ingle given a run in place of Beever-Jones and Wardlaw, the evergreen Drew Spence’s determined display in midfield was rewarded with the two goals which achieved the final 5-0 scoreline.
Her first, on 56 minutes, saw Charles chase a ball to the byeline and hook it back to set up a firm shot from Spence. Her second, on 79 minutes, saw England repeat the trick – cutting back a ball for the No24 to fire home.
It had all looked plain sailing until the worrying moment Eriksson fell to the ground and remained there for three minutes, silencing the rowdy onlookers in the players’ seating, where Pernille Harder, Sam Kerr, Fran Kirby, Maren Mjelde (on crutches), Ann-Katrin Berger, Ji So-Yun, Guro Reiten and Millie Bright had basically been enjoying a raucous girls’ Friday night out, shouting all manner of spicy banter at their colleagues on the pitch, laughing like drains if anyone fell over or miskicked a ball, and generally having the time of their lives. 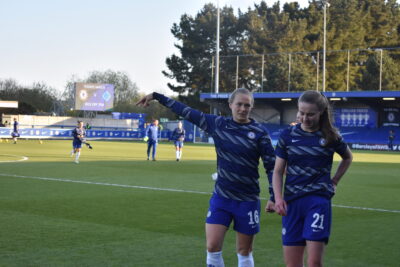 The laughter died as Eriksson (pictured left with Charles in the warm-up before the match) walked carefully off. Hayes said afterwards that there hadn’t been a full assessment yet, but that she was hopeful it was just a minor knock. “Magda? I haven’t seen her after the game. She landed a bit awkwardly, so she wanted to come off the pitch as a precaution, but I’m sure she’ll be fine.”
The real revelation of this FA Cup game was, however, the overnight blossoming of Jorja Fox. Her confidence and strength were simply sublime, she linked up beautifully on the left wing with Erin Cuthbert, overlapping with the Scot and exchanging one-twos that bamboozled the Lionesses’ defence. And she doesn’t even turn 18 until the summer.
“It’s no surprise to me,” said Hayes. “Jorja can play any position on the outside – left or right back. She’s composed, she has good vision and good decision-making. She’s a good athlete; she’s quick. She’s going to have a great career.”
Hayes insisted that full back was her best position, although her wing work with Cuthbert might suggest a more forward role in time. One thing everyone at Chelsea is sure of (and a wider public now appreciates) is that the future is exceptionally bright for this particular Fox.
Charles and Leupolz were also very accomplished on the evening, cementing their positions in a team that now has to really prove it can climb to a new level when the pressure is on. “Naimh is a top person; she’s flourishing,” said Hayes of Charles.
Friday night’s outing was a walk in the park compared to what’s round the corner. At times it felt like a training match, with Telford in goal reduced to being a distant lonely spectator; for long stretches the only Chelsea player in her half of the pitch.
“The intensity and pace of the game was really good considering there’d been so many changes,” said Hayes. “We played what we felt was our freshest team [after the international break], and we looked really fresh; there was a lot of selfless movement.”
Asked why she’d taken off Beever-Jones and Wardlaw at half-time (and 3-0 up) to replace them with internationals, Hayes explained: “I have to prepare the team for what’s going to be a big week, and it was important for Beth and Jessie to get some minutes.”
Melissa Phillips, the Lionesses’ manager, said: “We didn’t give away any sloppy goals, but we were up against world-class players. We wanted to learn about ourselves, and it’s exciting for our players to come up against players of that calibre.”
Plenty of lessons were learned, but it’s the lessons Chelsea learns in the next fortnight that will define this season.