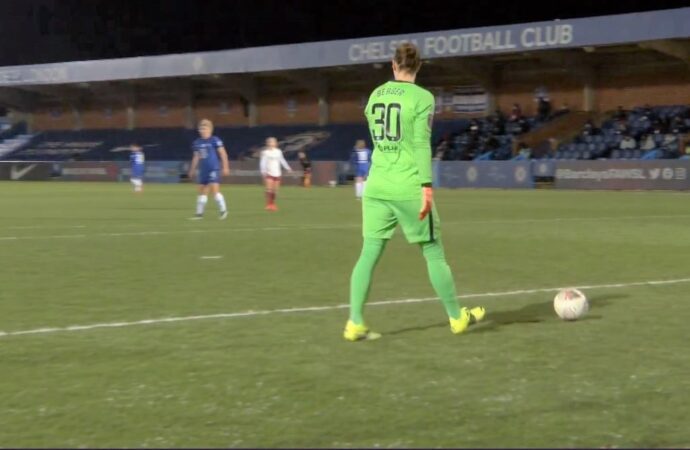 They’re not quite there, but they’ve overcome the biggest obstacle in their path as they attempt to retain the league title. Chelsea Women travelled to arch-rivals Man City on Wednesday night and gained a crucial 2-2 draw in a match which was the greatest possible advert for the women’s game. Ann-Katrin Berger pulled off a

They’re not quite there, but they’ve overcome the biggest obstacle in their path as they attempt to retain the league title. Chelsea Women travelled to arch-rivals Man City on Wednesday night and gained a crucial 2-2 draw in a match which was the greatest possible advert for the women’s game.

Ann-Katrin Berger pulled off a world-class fingertip save to confirm her status as a goalkeeping maestro, Sam Kerr’s bullet header for Chelsea’s opener was also classy, and Pernille Harder kept a cool head to score a pen after Kerr had been felled in the area.

But a few uncharacteristic errors by the Blues assisted City, with a draw being a fair outcome at the end. Manager Emma Hayes was relieved to hear the final whistle as City pressed and probed. “I hated every single minute of the second half,” she said. “It was agonising.”

It was agonising for fans, too; forced to watch the telly when they’d have relished travelling up the motorway to enjoy the two best teams in England slug it out, with just two points separating them… still.

With two matches to go, the title is Chelsea’s to lose. But now the focus switches to Sunday’s first leg of the Champions League semi in Germany against Bayern, and the chance to advance to the final of the competition Hayes most wants to win.

If Magda Eriksson is fit for the two Bayern games, Chelsea have a real chance. But if she fails to recover from a sprained ankle – sustained when she landed awkwardly in the final quarter of an hour against the London City Lionesses in the FA Cup – then the Blues could still struggle.

She was missed against City. Although Sophie Ingle was an able alternative, it seemed to upset Millie Bright’s rhythm, prompting the stand-in captain to make several errors. Also at fault, uncharacteristically, was Fran Kirby who, faced with an opportunity to clear danger in the dying phases of the match, inexplicably turned towards her own goal and delivered a sub-standard back pass that was intercepted. She must be disappointed in herself as it led to the equaliser with 15 minutes of normal time remaining.

Berger was, however, player of the match, even if commentators gave that title to Lauren Hemp for City. Berger was commanding; bossing her area, catching balls that others would have fisted and refusing to be intimidated by close marking at corners.

The pivotal moment came in the 79th minute. City had a corner, Hemp rose to meet it and back-headed it goalwards, and Berger swung out an arm to just deflect a ball that looked certain to go in. It bounced off the outside of the post and away, and Berger released all her tension in a roar that could probably have been heard as far away as Old Trafford.

The netminder was at it again, saving from Georgia Stanway with five minutes remaining, even though she suffered a thigh injury in the process.

One thing Berger is… fearless. She regularly picks up knocks, but like The Terminator, gets back to her feet to carry on saving. The more she’s hurt, the more she achieves.

With fine performances from Jess Carter at right back, Erin Cuthbert in the middle and Naimh Charles – in another excellent substitute’s role, this was a gritty, hard-earned point that maintains Chelsea’s advantage at the top of the Women’s Super League.

A great evening for the girls that still (whisper it) keeps them in contention for what would be a remarkable quintuple.