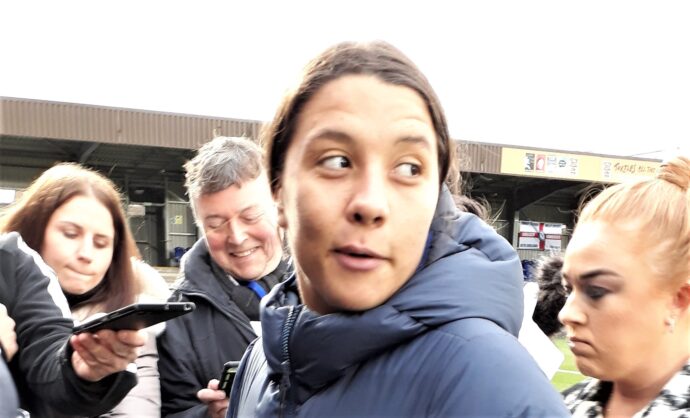 Chelsea Women flew to Sweden on Friday morning to start preparations for the biggest night in the football club’s 30-year history. With in-form Sam Kerr, pictured, up front and Fran Kirby playing on her shoulder as part of an arrow-shaped attack combination, manager Emma Hayes hopes the fleet-footed double act will unlock the miserly defence

Chelsea Women flew to Sweden on Friday morning to start preparations for the biggest night in the football club’s 30-year history.

With in-form Sam Kerr, pictured, up front and Fran Kirby playing on her shoulder as part of an arrow-shaped attack combination, manager Emma Hayes hopes the fleet-footed double act will unlock the miserly defence of Barcelona on Sunday evening’s Women’s Champions League final in Gothenburg.

Having retained their Women’s Super League title last weekend, the task this week has been rolling over the momentum to the Gamla Ullevi at 8pm, into the final of the competition that is top of Hayes’ wish list.

With holders Lyon knocked out, there will be a new name on the trophy, but the bookies have Barca as favourites in a match being broadcast free on one of BT Sport’s channels. Barca were beaten finalists in 2019.

“I really respect Barcelona but I cannot wait to play them,” said Hayes. “It’s our time and there are so many players in that dressing room that can win the match for us.”

Kerr, reigning player of the month and the season’s golden boot winner, said: “It’s been a long season for us and a lot of hard work has gone into it.”

She said that the turning point in her much-vaunted partnership with Mighty Mouse Kirby came shortly after Christmas.

A 5-0 away thrashing of Reading saw Kirby score four times, with Kerr the provider. “She’s an unbelievable player; if you put the ball at her feet, she’ll score,” said Kerr.

The pair have worked tirelessly on developing what now seems a telepathic relationship in opponents’ goalmouths, with each supplying the other with killer final passes.

It reached a new height as Chelsea again beat Reading 5-0 at the weekend, this time at Kingsmeadow, to cue bottles of bubbly bursting on a pitch where cups of tea are usually prohibited.

Kirby scored twice last Sunday and Kerr once, earning Kerr the golden boot ahead of Arsenal rival Vivianne Miedema. But just as crucial was another clean sheet, and the award of the golden glove to Ann-Katrin Berger for her goalkeeping achievements during this remarkable season.

“It’s definitely the best team I’ve been a part of,” said Kerr of her Chelsea teammates – some statement from the girl who has already won the golden boot in Australia and the United States. She already had five, with her mum the custodian of her trophy haul back home in Perth.

They’ll need all their ability and focus for the match. Manager Hayes (who will dash back to Blighty early Monday for son Harry’s third birthday party) will have to give the half-time pep talk of her career.

The Chelsea players have done all the hard work (“It’s not been all roses and butterflies,” said Kerr) and have the biggest, most elusive trophy within their grasp. “Emma Hayes? She’s been really, really important to me,” said Kerr. “A lot of people doubted me at the beginning of the year, but her belief has really encouraged me to get back into form. She’s got me into the position of being the best player I can be.”

Hayes claims she has fate on her side. On the one and only occasion she visited a fortune teller she was told that she would do amazing things at Chelsea “and inspire generations of little girls”.

She has motivational words and videos standing by to play to her squad before the final in Sweden. “I really believe there’s another level in us, I really do,” she said. “I’m so looking forward to watching us find that level and competing for the honour of being champions of Europe.”

Meanwhile the 27-year-old Aussie striker is keen to prove early-season doubters wrong after voices were raised about her patchy goalscoring return. “I haven’t done everything I’ve wanted to do, but I’ve definitely proved I’m a goalscorer,” she said. “I’ve done it in different leagues around the world, and I don’t think many players have done that.

“If you look at our squad, a lot of players in the team have had their best season,” said Kerr, paving the way for this, ultimate challenge.