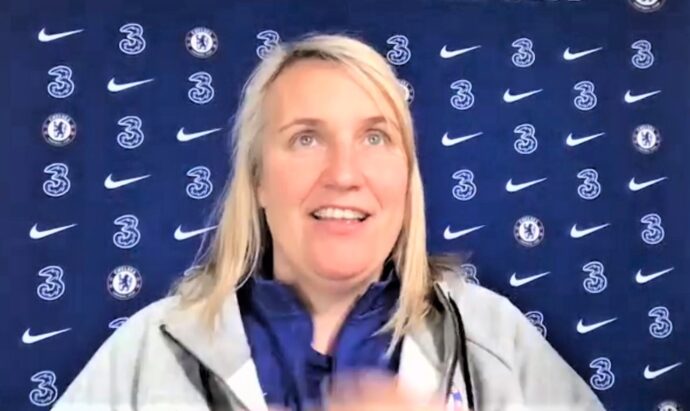 Anxious that she might be tempted to manage a men’s Premier League club, Chelsea have pinned Emma Hayes down to an extended contract to lead the women’s team.  Hayes – who has been receiving plaudits for her insightful analysis and TV commentary at the Euros – has been given a hefty pay rise, making her

Anxious that she might be tempted to manage a men’s Premier League club, Chelsea have pinned Emma Hayes down to an extended contract to lead the women’s team.

Hayes – who has been receiving plaudits for her insightful analysis and TV commentary at the Euros – has been given a hefty pay rise, making her the best-paid manager in the Women’s Super League.

Earlier this year she was linked to the men’s vacancy at Wimbledon, but insisted she was staying in women’s football. There was even speculation that she might be wooed by Spurs, as she lives near the White Hart Lane stadium and Tottenham training ground.

However, the appointment of former Wolves manager Nuno Espirito Santos has ended that notion, and Hayes has accepted a lengthened contract at Kingsmeadow, where she has just led her team to the league title.

The small print hasn’t been revealed, but the new contract is believed to run until 2023, with a hike in pay for the 44-year-old, and a bonus structure which would see her handsomely rewarded if the Blues finally succeed in the ultimate goal… winning the Women’s Champions League.

She has been in charge of Chelsea Women for nine years and nearly 250 matches, winning 10 pieces of silverware including four WSL trophies. This season she came close to adding the one cup that’s eluded her – the European trophy – after Chelsea reached the final, but fell at the last hurdle to Barcelona.

“Everyone knows what this club means to me,” she said. “The work we’ve done together over the last nine years has been hugely rewarding, full of growth of the women’s game, accompanied with winning, which is one of the club’s key values. I really look forward to keep building on the successes we’ve already achieved and I’m delighted to have extended further.”

Chelsea director Marina Granovskaia, who holds the purse strings at Stamford Bridge, said she was delighted that Hayes had committed to a longer reign at Kingsmeadow. “History speaks for itself, and we are really proud of what she has achieved in the past nine years, not just at the club, but also for the growth of the women’s game,” she said.

By winning back-to-back WSL titles, Hayes has made it four times in six seasons that the Blues have finished as league champions; the most a club has ever won in the competition.

No wonder several top-flight men’s teams have been eyeing up the prospect of a first female gaffer, particularly in light of her recent Champions League run and depth of experience managing teams in the United States.

The news broke as arch-rivals Arsenal signed ex-Man City striker Nikita Parris from Lyon for a fee of nearly £70,000.