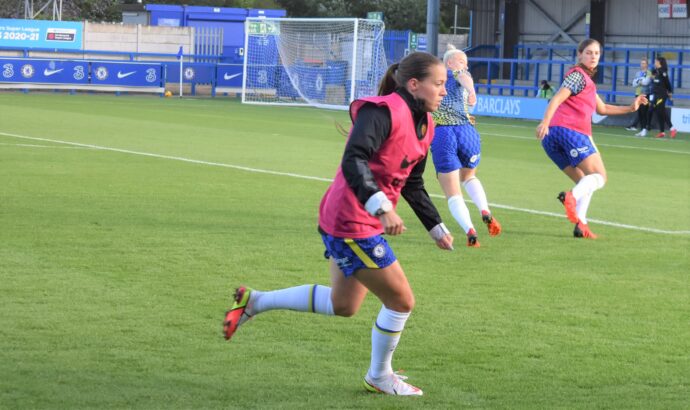 The spotlight is on Chelsea Women this weekend as they travel to face arch rivals Arsenal on the grown-ups’ pitch at The Emirates on Sunday afternoon for their opening game of the new Women’s Super League season. The women in blue will be looking to turn in just as professional a performance as the men

The spotlight is on Chelsea Women this weekend as they travel to face arch rivals Arsenal on the grown-ups’ pitch at The Emirates on Sunday afternoon for their opening game of the new Women’s Super League season.

The women in blue will be looking to turn in just as professional a performance as the men achieved a fortnight ago in their 2-0 win on the same stage, but manager Emma Hayes knows that the female Gunners have had more competitive match time (including a successful Champions League opener this week) and that there’s a real risk of her players looking rusty and sluggish, especially towards the final minutes.

There are bright signs. Defender Aniek Nouwen (above, right, alongside teammates Fran Kirby and Beth England) made her first appearance as a second-half sub in Chelsea Women’s pre-season friendly against Villa at a Kingsmeadow which was throbbing again after the fans returned. 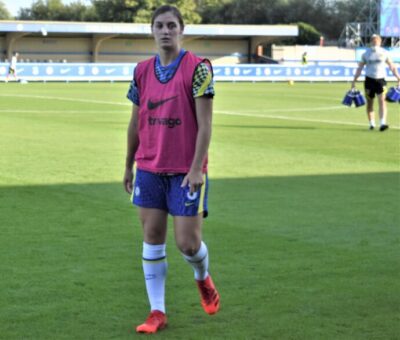 Give us a smile! New defender Aniek Nouwen

The Blues managed a 1-0 win, with Beth England scoring the only goal, using her hair bun to guide the ball in a graceful arc over the keeper’s head and into the net.

Within moments of Nouwen’s appearance, Chelsea’s resourceful fans had begun chanting the name of their new Dutch centre back, signed in the summer from PSV. Nouwen came on for Millie Bright, so it seems she’s a like-for-like back-up to the Blues’ doughty No4.

In fact, she was one of NINE simultaneous subs, all introduced in the 69th minute, which left the poor fourth official hopelessly waving numbers in the air like a crazed mime bingo caller, and which utterly flummoxed the stadium announcer, who gave up Tannoying the changes and merely listed them over the course of the next five minutes on the big screen. 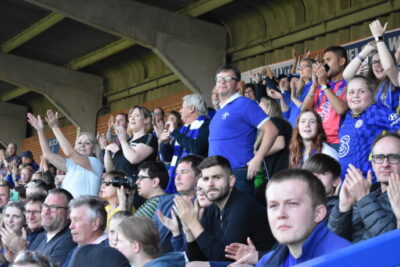 Great to see fans back at Kingsmeadow

“I’m happy with my debut for the Blues,” said Nouwen afterwards. She will take time to adjust to the pace of life in the WSL, and fit comfortably into her new role, but she seemed solid enough… even if she doesn’t smile as often as Millie!

Meanwhile striker Lauren James’s debut has been delayed, and may not happen for another week or two. “She had a lot of injury last year, so we’re trying to take care of her,” manager Emma Hayes explained. “We’re taking our time with Lauren.”

In fact, the muscular forward – sister of Chelsea men’s defender Reece – wasn’t even present at the ground, so has still to be formally introduced to the fans. 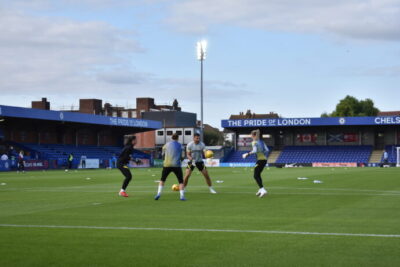 Three goalies in one shot

After Sunday’s match at Arsenal, Chelsea Women play their first home game of the new Women’s Super League season against Everton at Kingsmeadow on September 12.

With Chelsea’s men scattered to the four winds on international duty this weekend, Hayes knows this is an important time to make an early impression in pursuit of a third straight league title.

But (as a former Gunner gaffer herself) she also knows the strength and determination of the opponents her players will come up against on the big stadium stage on Sunday lunchtime.

It promises to be a tightly fought and intensive battle.