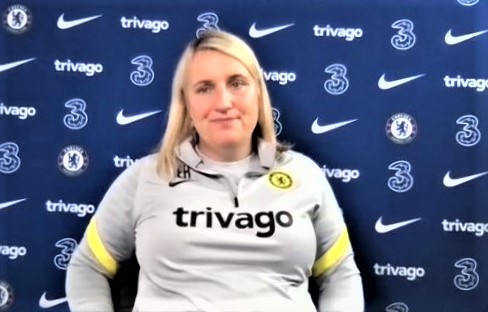 Bullish Chelsea Women’s manager Emma Hayes is full of optimism ahead of the new Women’s Super League season, which kicks off for her at Arsenal’s cavernous Emirates stadium on Sunday lunchtime. “Success breeds success,” she said, reflecting on two seasons of abundant silverware, and the hopes of a third league title on the trot. “I’m

Bullish Chelsea Women’s manager Emma Hayes is full of optimism ahead of the new Women’s Super League season, which kicks off for her at Arsenal’s cavernous Emirates stadium on Sunday lunchtime.

“Success breeds success,” she said, reflecting on two seasons of abundant silverware, and the hopes of a third league title on the trot. “I’m just looking forward to the season, to be honest. I’m excited to kick off my tenth season here at Chelsea; we’ve got a fantastic squad.”

But will it be enough to steal a march on close rivals Arsenal, who have had the advantage of competitive action ahead of Sunday? And is her squad stronger or weaker as it sets out on another journey?

“We had two out in Hannah Blundell and Jamie Lee Napier, and two in with Aniek Nouwen and Lauren James,” she said. “Two in, two out. We have a fantastic squad.”

She said that pre-season had gone well, culminating in a 1-0 home win which had seen the crowds return to Kingsmeadow, creating a buzz and an atmosphere of excitement. “I’m really proud of the achievements of the players, going away at the Olympics… and we’ve got a gold medallist in our camp!”

Of Sunday’s match, she said – at the first press conference of the season: “Arsenal have been playing in Champions League competitions for the last two to three weeks; they are already quite played-in as a team. I’m sure they will relish the opportunity in front of their home fans. All I know is I’m focusing on my own team and our efforts. I don’t make excuses. My team will be ready.”

She believes that Chelsea and Arsenal are “two teams that are very much at the same level”, adding: “It’s all you can ask for from a Sunday afternoon game.”

The initial target will be to find Chelsea’s edge, to gain an advantage over an Arsenal team which seems to have enhanced its squad like no other in the WSL, including the late signing of the American Tobin Heath.

Lauren James and Maren Mjelde (now back on her feet and doing light training) are unavailable for the squad this weekend, but everybody else is fit.

Hayes will be backed on the touchline for the first time by her newly appointed assistant coach Tanya Oxtoby, who managed Bristol City Women for three and a bit years. “Tanya has got great experience. I think she will really help to support me with the players, both on and off the pitch,” she said. “I am really, really excited to work with her…. I think she is a great person. I think she will have a really good rapport with the players and help us to continue to improve what we are doing.”

Tanya herself said: “It felt like the ideal move for me. I’m looking forward to working with world-class players to contribute to further success.

She worked alongside Chelsea Women’s general manager, Paul Green, at Doncaster Rovers Belles in 2012, where she played against Chelsea in Hayes’ first game in charge.

Green himself said: “We feel that she will add another dimension to our talented group, both on and off the pitch, that will impact the team.”