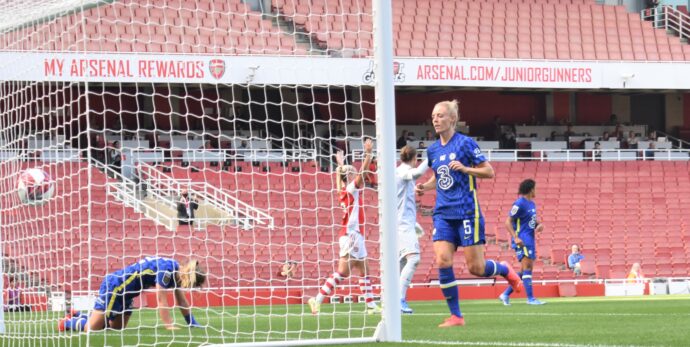 Chelsea Women’s manager Emma Hayes was prickly and short with questions ahead of the team’s first home match of the new season, against Everton on Sunday lunchtime. She batted off journalists’ queries without her customary warmth and bonhomie, perhaps feeling the pressure after last weekend’s defeat at the hands of Arsenal. Although she is keen

Chelsea Women’s manager Emma Hayes was prickly and short with questions ahead of the team’s first home match of the new season, against Everton on Sunday lunchtime.

She batted off journalists’ queries without her customary warmth and bonhomie, perhaps feeling the pressure after last weekend’s defeat at the hands of Arsenal. 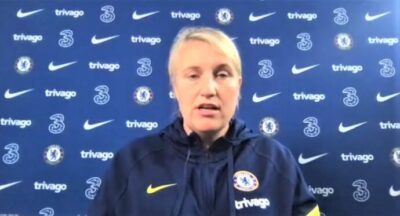 Although she is keen to stress that one game and one defeat is simply that, Hayes has had a challenging week, during which she has had to squeeze in her ‘other role’ as television pundit, sharing her thoughts on England’s men from a TV studio.

While there are some murmurs at senior level at the club, suggesting that this new ITV job may risk some conflict with the day job, she remains focused and determined to steady the ship after a 3-2 defeat which has galvanised one of the Blues’ main rivals for the WSL title.

Curt and abrupt, rather than adopting her usual expansive and friendly tone, Hayes brushed away questions that even vaguely hinted that her defensive tactics and team outlook were in any way faulty.

“I’ve always changed between formations,” she snapped, when asked if she planned to persist with three at the back. 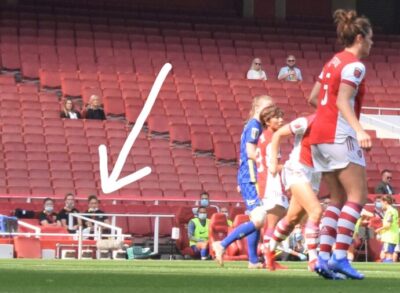 Lauren James, arrowed, watched Chelsea’s game against Arsenal, but is still unlikely to play any part in the league for another week or two

Of new defensive signing Aniek Nouwen, and whether she will be in the starting line-up, Hayes would only say: “She’s getting used to the pace and tempo; I’m sure you’ll see plenty of her.”

Everyone in the press box at the Emirates last weekend was in agreement; Chelsea Women’s usually resolute back line was short of pace, lacked anticipation and was, overall, second best to an Arsenal side which did have the benefit of three challenging competitive games behind them.

The main picture, top, sums up the despair among the blue defence after Beth Mead scored Arsenal’s third goal.

The Blues, with only training matches and one friendly in the run-up to the clash with the Gunners, couldn’t match the reds for tempo… even towards the end of a second half which saw Chelsea claw their way close to an equaliser as they flung everything at their opponents.

Everton Women visit Kingsmeadow at 12.30pm on Sunday – now a must-win match for a Chelsea side still haunted by a dreadful start to the 2019-20 season, when a succession of tedious 0-0 draws put paid to qualifying for Europe. To be fair to Hayes, the team were league and league cup champions that season, but there’s little doubt it’s the Women’s Champions League that is now the club’s true goal.

Striker Lauren James, signed from Man U in the summer, is still not match-ready, though the reason is shrouded in mystery. “We’re still taking our time to get things right,” said Hayes, elliptically, adding that Maren Mjelde was – however – on the brink of being back in full training with the rest of the team.

Though Hayes rarely singles out individuals for any criticism, she seemed less than gushing about right back Jess Carter, even though Carter is now in the England squad. “She’s deserving of that; it’s a big effort by her to get there. She’s got a huge future,” said the Blues manager, before saying that while she’s “performed very, very well for Chelsea”, she has to “cut out a few of the game-changing moments”.

That’s code for ‘Pull your socks up, Jess’. Carter seemed at fault for Arsenal’s first goal last weekend, being nutmegged by Viv Miedema, with goalie Ann-Katrin Berger similarly under scrutiny for allowing a goal to pass her at the near angle… never a good look. 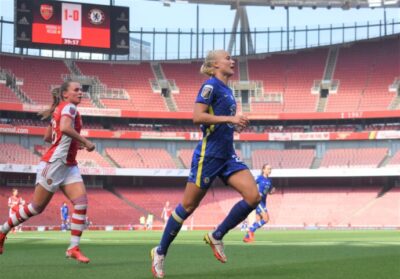 Everton’s defeat last week at the hands of Man City meant little to Hayes. It was shrugged off as a victim of First Match Syndrome, with 10 minutes of madness being blamed for the outcome.

“Everton started brightly,” said Hayes. “You plan for different options every week. Only a couple of teams are extremely rigid [in formation]. People get caught up too much in the first game of the season.”

A Chelsea victory on Sunday will restore belief in the team and the crowd, properly back at Kingsmeadow for the first time in eight months.