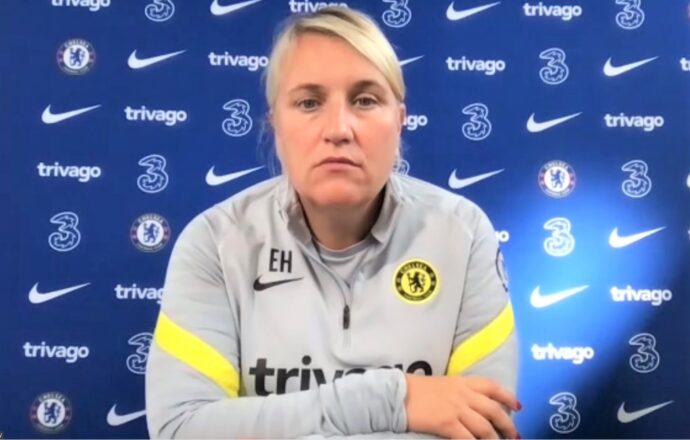 Emma Hayes’ Chelsea team are heading up to Manchester today for a lunchtime clash with United at Leigh Sports Village… a game that will be live on BBC2 as broadcasters wake up to the growing importance of the women’s game. Although United have won their first two fixtures of the season, the Blues will be

Emma Hayes’ Chelsea team are heading up to Manchester today for a lunchtime clash with United at Leigh Sports Village… a game that will be live on BBC2 as broadcasters wake up to the growing importance of the women’s game.

Although United have won their first two fixtures of the season, the Blues will be confident they have enough in the locker to defeat the Reds, even though Lauren James – the former Manc, signed in the summer – is still not deemed ready for selection.

It’s a frustrating start to her Chelsea career, but Hayes is adamant that she will not be rushed into picking the forward until the young striker is 100% fit and ready.

Asked at the pre-match press conference why she didn’t appear completely satisfied with her players’ performance after the recent 4-0 victory over Everton, Hayes insisted: “I’m never satisfied. I don’t think that will be different with any scoreline, because you never have a perfect performance. I felt there were things we could have done better.”

She still feels the team is reaching its peak in this early phase of the new season, and believes the untapped potential holds the key to another serious go at the title.

Mindful of Chelsea men’s stumble against Mancunian opponents at Stamford Bridge on Saturday, she’ll be stressing to her starting XI that nothing short of full focus will be tolerated against United.

In the only other away clash with United, the outcome was a 1-1 draw. Now with Marc Skinner in charge, another close match is in prospect. 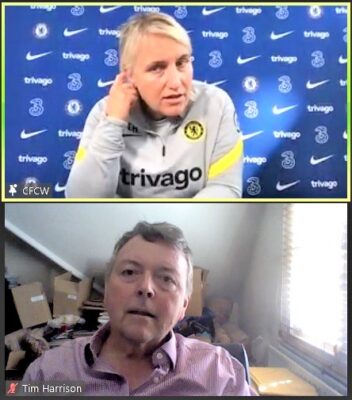 I asked Hayes about Lauren James’ readiness, knowing that she had watched the opening weekend’s defeat to Arsenal and that win over Everton from the stands… sitting alongside the recovering Maren Mjelde and goalie Carly Telford.

“She’s settling in really, really well,” said Hayes. “She’s home and is in an environment that was much-needed for her with her family around. She’s not available for selection, not at this moment in time. We still feel we’ve got to get some things right off the pitch.

“Like I’ve said, if we want Lauren to be successful, we’ve got to get everything in and around Lauren right. She’s still a young player that has played a lot of football, and had substantial injuries. My job is to make sure I keep her on the pitch once she comes back into the team and for now I’m taking the time to build all those areas around her.”

The Blues gaffer insisted she didn’t have a timeline for James’s readiness, or debut. “No, I don’t,” she said. “Timelines are just going to add pressure. I need to feel she’s picking up all the advice and support; everything she needs to make sure she’s not picking up recurring injuries. That’s the big goal here.”

She alluded to muscle injuries and stress-related injuries, but said that she was confident that Chelsea’s medical team, performance team and technical team were doing everything possible.

“We want to get everything right, so we are building Lauren for the long term and not just the opening few weeks of the season.”

Kick-off at Manchester United is 12.30pm.