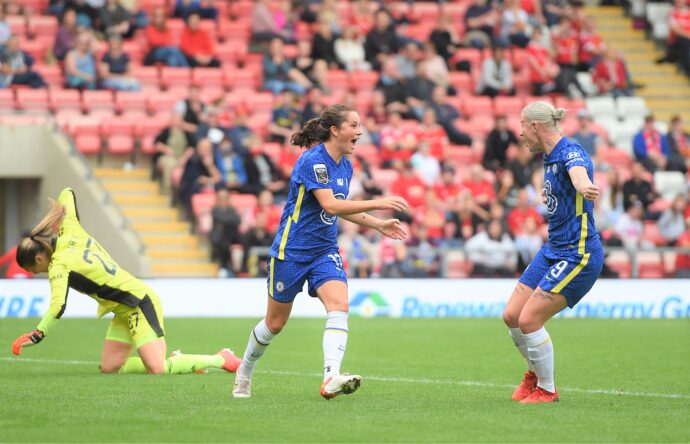 In a majestic away performance in Manchester, Chelsea Women offered a textbook example of teamwork and squadwork, putting six goals past United to underline just how good the side are, from top to toe. Even the evergreen Drew Spence got in on the act, coming on as one of the subs to score her first

In a majestic away performance in Manchester, Chelsea Women offered a textbook example of teamwork and squadwork, putting six goals past United to underline just how good the side are, from top to toe.

Even the evergreen Drew Spence got in on the act, coming on as one of the subs to score her first of the season as the Blues secured a 6-1 victory… with Man U’s only goal coming via a wicked deflection and a graze off the post.

Chelsea started at the gallop at Leigh Sports Village as United, under new manager Marc Skinner, nearly went behind after 16 seconds, with Sam Kerr’s effort saved by Mary Earps.

But it only took one and half minutes for the superiority to tell. As United tentatively tried to play out from the back, Kerr intercepted and fed – who else? – Fran Kirby to poke home. 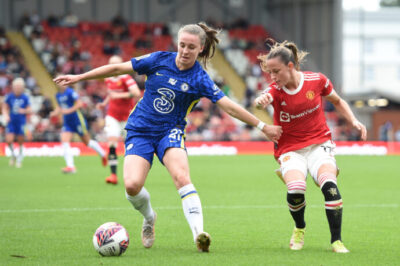 Niamh Charles, who is gaining strength and purpose with every match she plays, was proving equally good in defence and attack, linking well with Sophie Ingle in midfield.

With Maria Thorisdottir and Hannah Blundell both playing in red after long Chelsea careers, you’d have hoped the Blues might be given a sterner test… but the away team were two up in 24 minutes, thanks to a long, productive run by Pernille Harder, jinking the ball over the keeper for a lovely finish. Then it was 3-0 to the visitors with Kirby teeing up Kerr for an easy tap-in four minutes before the break.

Alessia Russo, who learnt her trade in the Chelsea development squad, came on as a sub for United in the second half, and scored within three minutes; her shot deflected past Ann-Katrin Berger via Millie Bright’s extended leg, then going in off the upright.

The Blues’ reply was dazzling. Kirby fed the ball to Kerr, who (though clearly offside) converted, with the lino struggling to keep up with play. It prompted an intriguing remark from Chelsea manager Emma Hayes at the end.

She said that the Football Association needed to prioritise achieving a professionalism among the officials to match that of the full-time players… even ahead of goalline technology and VAR. “We have to support the FA in developing our officials for the next level,” she said, after a game beamed live on terrestrial television.

A slew of subs for both sides meant Drew Spence was on the scoresheet in the 87th minute, to the delight of the travelling fans, after fellow subs Jessie Fleming and Beth England had played their part.

Then Fleming followed up another Spence shot in stoppage time to complete the 6-1 victory. The main image (Picture: Chelsea FC) shows Fleming wheeling away in delight to celebrate with her teammate England as keeper Earps takes her frustration out on the pitch.

“I thought we were poor in the first half… and we were 3-0 up,” said Hayes afterwards, with a smile that suggested she’d settle for this level of poverty any day. She does want more from her team, but she’s already getting plenty from a squad which seems purposeful, determined to support each other, and working towards achieving an edge over any opponent, week in, week out. 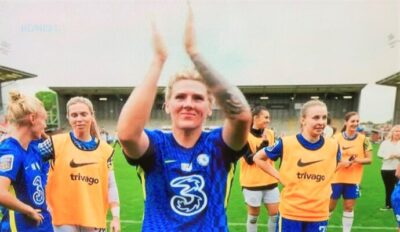 Hayes said that she had given Harder a freer role to allow her to make runs such as the one that resulted in her exquisite individual goal “Six-one against Manchester United away is a great win,” said Harder. “But I think we can [still] get better all the time.”

There’s a demanding couple of weeks ahead, when the full resources of the squad will be called upon. A cup game at Birmingham in midweek is followed by three quickfire home matches against Brighton, Wolfsburg and Leicester.