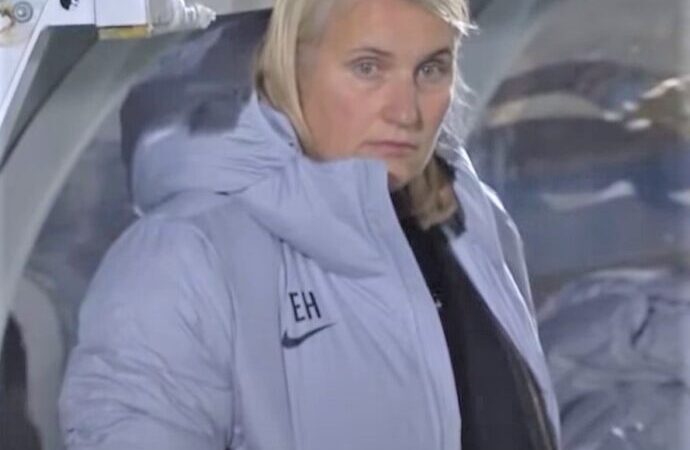 Chelsea Women’s manager Emma Hayes looked shellshocked in the dugout as the Blues threw away an early lead and found themselves 3-1 down to German visitors Wolfsburg at the start of the second half of their midweek Champions League match at Kingsmeadow. But she was mightily relieved to escape with a point thanks to a

Chelsea Women’s manager Emma Hayes looked shellshocked in the dugout as the Blues threw away an early lead and found themselves 3-1 down to German visitors Wolfsburg at the start of the second half of their midweek Champions League match at Kingsmeadow.

But she was mightily relieved to escape with a point thanks to a late goal in stoppage time which earned a 3-3 draw, delighting the 1,371 spectators. 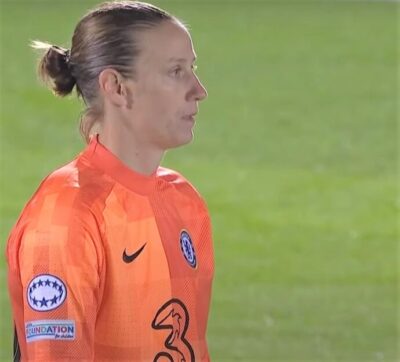 Ann-Katrin Berger, usually so dependable, had a mare for Chelsea

A dreadful string of out-of-character errors turned the game on its head after a rosy start under the floodlights when Sam Kerr’s lob flew over German keeper Almuth Schult’s head on 12 minutes as the Blues utterly dominated the opening quarter of an hour, winning five corners and threatening a rout. 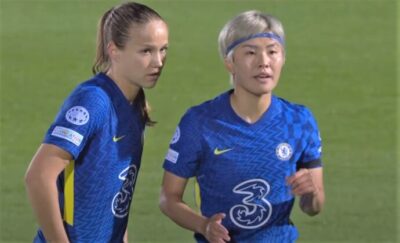 But Tommy Stroot’s Wolfsburg are tough cookies. Unlike Chelsea’s varied physiques, every German player appeared to have the strength and build of a Millie Bright… and the pendulum swung the way of the visitors.

A total muddle in the usually organised Chelsea defence saw Ann-Katrin Berger leave her area only to collide with Magda Eriksson, allowing Tabea Wassmuth to steal in and bang it into the unguarded net for 1-1. 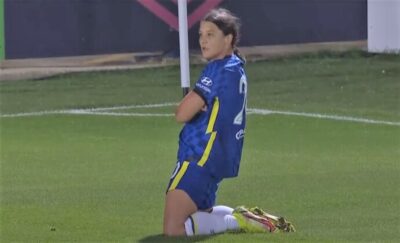 It all looked so rosy when Sam Kerr netted the opener

Then, after 34 minutes, Berger cleared the ball to Mel Leupolz… but Jill Roord intercepted and fired it straight back, and past her.

Crazily it became 1-3 to the visitors three minutes after the interval when Wassmuth again capitalised on a misunderstanding between the normally synchronised Jess Carter (having her worst game for the Blues in an age) and Berger. She fired home from a narrow angle, leaving Emma Hayes bemused and confused on the touchline.

It was just one of those nights for Ann-Katrin Berger

But Chelsea responded, and it was 2-3 in the 51st minute. Chelsea won another corner, there was a flurry of activity in the Wolfsburg area as Pernille Harder tried to score, then Beth England pounced on the loose ball and netted.

And that looked like that as the Germans held on and the clock ticked. But in the first minute of stoppage time a frantic Chelsea breakaway attack saw Harder score the vital equaliser. 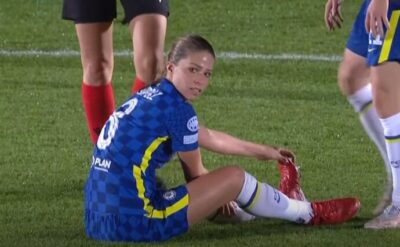 Mellie Leupolz went down with cramp at the end

“Take the point,” screeched Hayes from the touchline, as Melanie Lupolz went down with cramp and the Blues played out the remaining moments with, effectively, 10 players.

This was a match which will puzzle Hayes and perplex the squad. Fans were shaking their heads in disbelief as they left. Six goals, equally shared, was a better outcome than Chelsea had dared hope at the start of the second half.

“I’m not going to talk about the three goals we conceded because it’s obvious for everyone to see,” said Hayes. “Sixty-two per cent possession… [Uefa officially put it at 58%] we had all the dominance we needed, but mistakes happen. We’ll just have to work at getting better than that.” 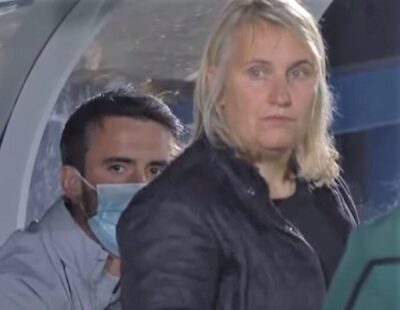 Grim faces say it all

Hayes talked about the resilience of her squad, rather than addressing the “terrible errors”. She said Juventus, the next opponents looming on the horizon in Italy in a week’s time, was a tough task ahead.

She said the Chelsea fans were amazing, and “never gave up on the team”.

But it is still a result that – at Kingsmeadow – isn’t good enough if Chelsea are serious about adding European silverware to their growing collection.