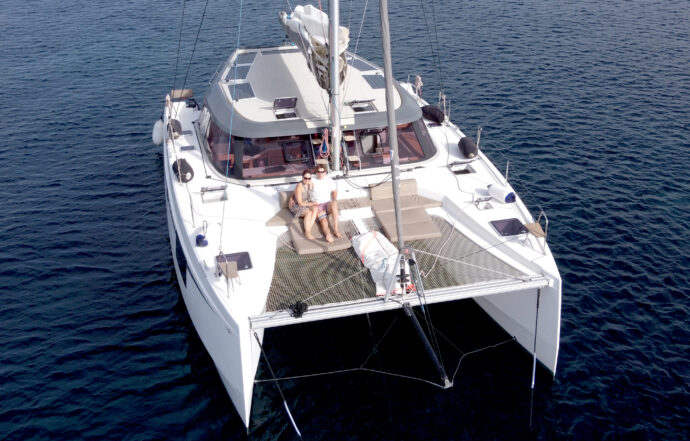 Tatum Diamond always said she loved the ocean. And from now, and for the next few years if everything goes according to plan, the sustainable handbag and purse designer is going to be seeing a lot more of it… from the deck of a 40ft catamaran called Nautilus. Named after Captain Nemo’s submarine in Jules

Tatum Diamond always said she loved the ocean. And from now, and for the next few years if everything goes according to plan, the sustainable handbag and purse designer is going to be seeing a lot more of it… from the deck of a 40ft catamaran called Nautilus.

Last month they switched from their four-bed, semi-detached in Pound Close, Long Ditton, where they had been living for the past nine years, for the Nautitech Open 40, which they hope will take them round the Med while they are learning the ropes (literally) for a couple of years, before they set off across the Pond to the Caribbean. 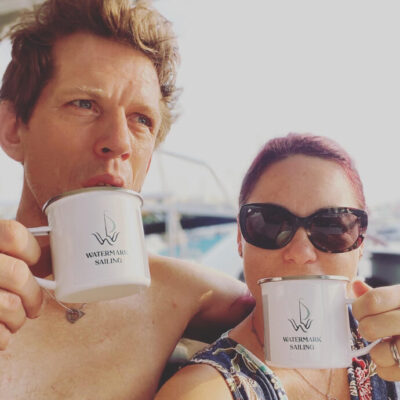 “If that all works out well, we’ll go through the Panama Canal – it should be a truly unique experience – to the South Pacific heading for the Galapagos, Fiji and then on to New Zealand and Australia,” said Tatum, whose previous experience of sailing only consisted of nine days in total (which included five as part of her Royal Yachting Association Day Skipper course).

Fortunately Caspar, whose work in IT digital services has also seen him build online training for seafarers, is an old sea dog, well kind of. He grew up in the Isles of Scilly where he was always out on the water, either sailing with his father, water skiing, or working on the local inter-island ferries.

“Our journey has only just started,” explained Tatum who is a keen scuba diver and describes herself as a water baby, loving being in it, on it, near it, she’s in her happy place. “We moved to Malta in the middle of September and plan to be here for the next six months before we start becoming more nomadic.

“So far we have explored the Maltese coast, including Comino and Gozo and we’re hoping to get over to Sicily for a few weeks before the weather closes in.”

Tatum said their adventure was a leap into the unknown. “Caspar has the sailing experience, having sailed with his father for many years. However, most of this has been coastal sailing. Oceanic sailing will be a completely different kettle of fish and is one of the reasons we are starting gently in the Med to build up our skills and confidence in Nautilus.”

What was the catalyst for this romantic adventure?

“A recognition that life is short and the world is changing very quickly. We have always loved to travel, but increasingly realised the impact this has on the environment. Sailing allowed us to combine a love for the sea, with a more sustainable way of seeing the world. It is a very different pace of life, so a change in circumstances around work allowed us to become digital nomads and make this lifestyle change.”

The environmentally aware couple have already been involved in beach cleans in Malta and hope to become self-sufficient, generating their own electricity via solar panels and desalinating all their water.

“Being more sustainable is a huge part of why we have decided to make the lifestyle switch. Being able to see more of the world without the guilt of the large carbon footprint is great.”

Things they love: Boat life, being able to swim whenever they want, and being able to explore a new place while taking their home with them.

Things they miss: Friends and family, having a washing machine (until their boat-friendly one arrives), and next day delivery. “Malta doesn’t have Amazon.”

On the to-do list: Caspar is planning on getting his professional skipper licence and Tatum wants to fulfil her dream of studying marine biology.

“We’d also like to work with a university to help students with ocean research,” she said.