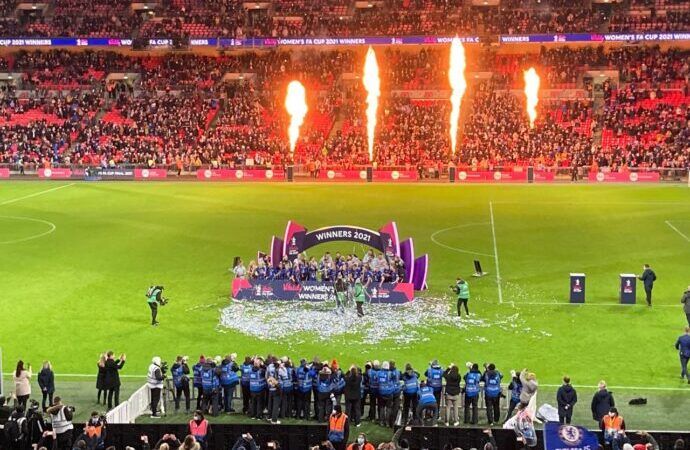 Chelsea waltzed to victory in Sunday’s FA Cup final, outclassing league leaders Arsenal and completing a belated treble in a fixture delayed from the spring because of Covid. Sam Kerr scored twice, and could have had half a dozen with a little more precision as chance after chance was created by an integrated, focused and

Chelsea waltzed to victory in Sunday’s FA Cup final, outclassing league leaders Arsenal and completing a belated treble in a fixture delayed from the spring because of Covid.

Sam Kerr scored twice, and could have had half a dozen with a little more precision as chance after chance was created by an integrated, focused and determined team who simply blew the Gunners away from the very first minute.

The 40,942 who generated a terrific buzz inside Wembley – 5,000 short of the Women’s FA Cup record attendance in 2018 when Chelsea beat Arsenal 3-1 – were entertained to a largely one-way assault, with the Blues refusing to let the Gunners settle on the ball and utterly dominating midfield through the dazzling endeavours of Mellie Leupolz and Sophie Ingle. 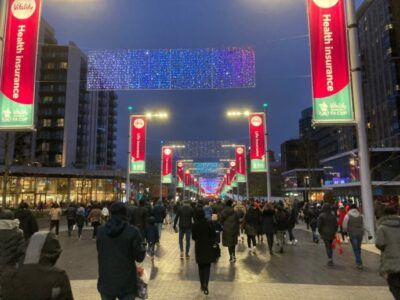 Up front, Fran Kirby and Sam Kerr – the Special K pairing – gave a masterclass in synchronicity and intuition, understanding and predicting each other’s movements and darting runs as if they were two halves of the same apple.

“We deserved it,” said Kerr at the end, after being named the player of the match and necking a bottle of bubbly on the podium before manager Emma Hayes could issue the stern warning to her team that Juventus are visiting Kingsmeadow in the Champions League on Wednesday, and that full-blown celebrations will have to remain on hold.

Perversely, the only serious injury of the game came as the streamers flew and the champagne flowed. Central defender Millie Bright, who with captain Magda Eriksson, Jess Carter and Erin Cuthbert on the right had an outstanding game, sustained a cut above her eye when the top flew off the trophy as Eriksson hoisted it into the air for the cameras.

The match began at the gallop on a firm Wembley pitch which had been cut into attractive diamond shapes by the ground crew. After precisely two minutes and 19 seconds, Kerr and Kirby ran at the Arsenal defence and made the most of a rebound off a centre back to allow Kirby to sweep the ball into the net. 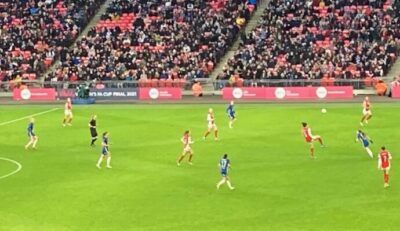 Arsenal, frankly, never recovered. A slew of first-half chances went begging, partly due to Manuela Zinsberger’s sharp goalkeeping, but mainly due to the outstanding Beth Mead’s commanding presence, closing down space and attempting to launch countercharges. Without Mead, the Gunners would have been humiliated, never mind beaten.

Kerr got on the scoresheet in the 57th minute, to finally settle Hayes’ nerves on the touchline. Scoring a goal of elegance and simplicity, she gave defender Lotte Wubben-Moy the runaround, then wrong-footed Zinsberger by unexpectedly slotting the ball home at the narrower angle.

The win was rounded off by Kerr in the 78th minute as a cheeky chip from the Aussie star left the keeper rooted to the spot, watching the ball sail over her head. 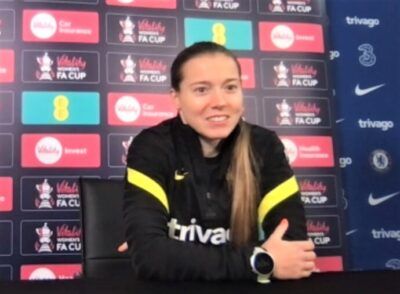 Ahead of Sunday’s cup final, Fran Kirby said the finest feeling was scoring and winning at Wembley. She got her wish

Kirby could have had a couple more goals too… one of her better efforts crashing off the post just moments before Kerr sealed the deal.

“Sam Kerr fits in our system perfectly,” Eriksson had commented ahead of the game. “I played against her in the Olympics for Sweden; she’s good on the ball, she’s fast and she’s difficult to stop. She’s a team player as well.” How right she was.

For overjoyed manager Hayes, who had said before the match that “the FA Cup final is about history, and making more history”, this was a sweet win – a vindication of all the hard work put in on the training pitch and in the tactics room by the backroom staff. It is the (delayed) icing on the cake of a remarkable 2020-21 season.

“I thought we got it spot-on; we predicted what [Arsenal] were going to do, and our front two were out of this world. Everyone did the job we asked them to do, and to think we’re now the treble winners is amazing,” she said.

Kirby remarked that everyone in the Chelsea dressing room had seemed remarkably calm before the game. “We just didn’t expect to blow them away as we did in the first half,” she admitted.

Before the match, brandishing peach-coloured nail varnish, Kirby had said that there was no better feeling than scoring and winning at Wembley. Which accounted for the broadest grin in the national stadium as ref Helen Conley blew the full-time whistle, cueing celebrations at the flag-waving Chelsea end of the ground. 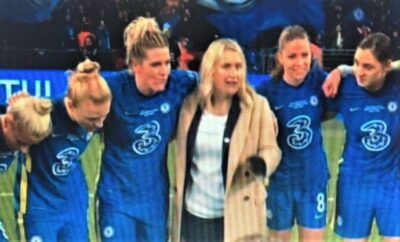 There were late substitute runs for Drew Spence, Ji So Yun, Beth England and Aniek Nouwen (her cameo so far into stoppage time that she didn’t even get to touch the ball); a nice gesture by the thoughtful manager who, in her moment of triumph, still had time to reward other squad members by at least getting a short run on the hallowed turf.

On this form, Chelsea Women’s chances of getting to another Champions League final look promising, while the league, league cup and another FA Cup are surely not beyond the realms of possibility.

This was a stirring, complete and accomplished performance by a tip-top group of professionals, marshalled by a wise owl in the shape of Emma Hayes. It truly was a thing of beauty.