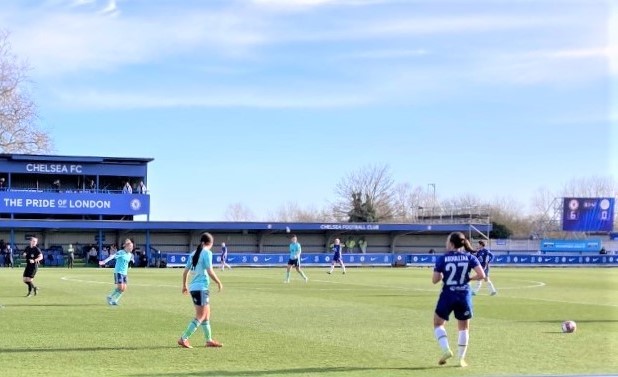 As Emma Hayes was watching Chelsea Women thrashing Leicester City 7-0 in the 5th Round of the FA Cup (the stadium announcer played the Magnificent Seven theme to celebrate), Roman Abramovich was thrashing out the words of a statement handing her the reins of power! The oligarch ceded stewardship of his club to the trustees

As Emma Hayes was watching Chelsea Women thrashing Leicester City 7-0 in the 5th Round of the FA Cup (the stadium announcer played the Magnificent Seven theme to celebrate), Roman Abramovich was thrashing out the words of a statement handing her the reins of power!

The oligarch ceded stewardship of his club to the trustees of the Chelsea Foundation to avoid the risk of being sanctioned after his home nation invaded Ukraine, but it seems Hayes had no advance knowledge of the manoeuvre ahead of the 1pm kick-off on Saturday at Kingsmeadow.

With three-quarters of an hour to go before the match she was putting her feet up in her office at the stadium in Norbiton to watch the opening exchanges in the day’s early Premier League clash between Leeds and Spurs!

Abramovich’s announcement (which made no reference to his old acquaintance Vladimir Putin’s brutal war against a democratic state) was made to avoid Chelsea being seized as an asset of the billionaire… but it leaves the Blues Women’s gaffer in the bizarre position of suddenly being liable for anything and everything at the club, along with fellow trustees Bruce Buck, John Devine, Piara Powar, Paul Ramos and Sir Hugh Robertson.

Curiously, news that Abramovich was placing Chelsea at arm’s-length emerged just as Hayes made the decision to bring on left-sided Russian player Alsu Abdullina (pictured) as a second-half sub. Did Hayes have any qualms or doubts about placing the defender in the spotlight, in view of international events, The Good Life asked her at the end of the game? “No,” she answered, firmly.

The Blues fans who made up the bulk of the 2,723-strong crowd at Kingsmeadow behaved impeccably, loyally chanting Abdullina’s name as she began scurrying up and down the left wing in place of Jonna Andersson in the 71st minute. By then, in truth, the game was done and dusted at 4-0 after Foxes defender Sophie Howard was red-carded in the 17th minute by ref Emily Heaslip, who deemed a full-blooded tackle on Andersson to be reckless. Howard defiantly peeled off her shirt as she marched down the tunnel. 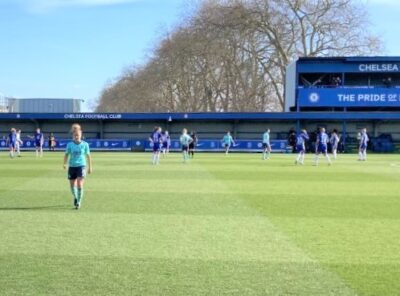 It was the turning point in the match. Until then, Leicester – despite their lowly league status – had not only gone toe-to-toe with the Blues, but seemed sharper on the break, forcing a save out of Ann-Katrin Berger in the third minute, then launching a barrage of shots on the Chelsea goal in the 14th, capitalising on the fact that Berger had the bright, low winter sun in her eyes. The defensive line of Niamh Charles, Aniek Nouwen, Millie Bright and Andersson had to fling bodies on the line to deny the Foxes any reward.

The floodgates opened in the second half as the Foxes tired. Kerr bagged a brace, Ji So-Yun scored, Nouwen headed home and sub Beth England added a seventh.

Lauren James made her first start for the Blues, and did well in the gaffer’s eyes before being subbed for Jessie Fleming shortly after the hour mark. 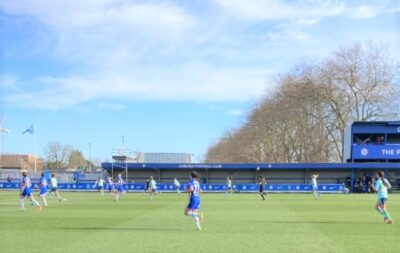 At the end of the game Hayes refused to criticise ref Heaslip for the decision which really made the result inevitable, pointing out that women’s referees get £120 to superintend a match (while Premier League refs pocket £1,500 a game, on top of a healthy basic salary). “There’s real difficulty bringing through officials because the pay is really, really low and the expectations are really, really high. I don’t want to kill them [by criticism], we have to support the officials by making them full-time,” she said.

Hayes said the second half had seen Chelsea perform more like themselves, having had reservations about the way her girls had started the match. There were too many turnovers, she felt, and the Blues didn’t support each other in the way they usually did.

She’ll be hoping for a better starting display at the quarter-final, and – if successful – semi-final stages of a competition that Chelsea have dominated in recent years.

Of Abdullina’s 20-minute performance as a sub on the left wing – racing forward with impressive strength and pace, and providing a string of useful crosses – Hayes said that it was especially noteworthy as she had been away on international duty, where she had played all three matches for Russia against Hungary, the Republic of Ireland and Belgium.

“I felt it was a good situation to get her into a game, even on the back of three games in six days, so I’m really, really happy with her,” said Hayes.

Was there, Hayes was asked, any degree of discomfort in the dressing room about Abramovich’s ownership of Chelsea in light of the Ukraine invasion? “No, not particularly,” she said. “I think there’s discomfort for all of us, the fact that there’s war in Ukraine – I don’t think it’s because of our owner. We’re all human beings, and naturally we’re worried about the course of events. But I don’t think there’s a particular reason for that.” She added that she hadn’t discussed the war with her players.