A night of ‘awesome’ Austen 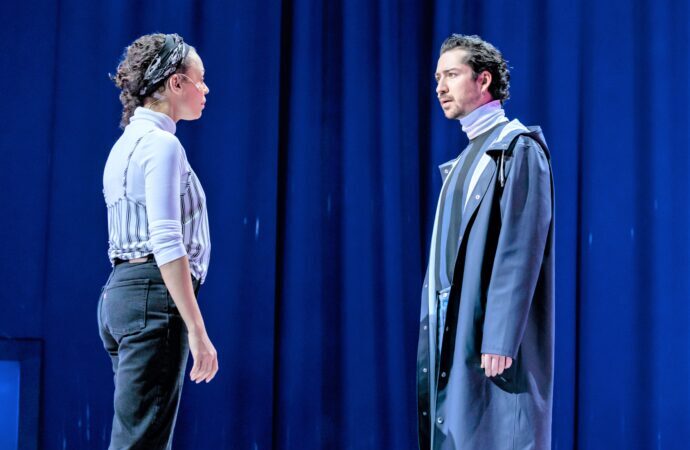 Were Jane Austen to have sat through the Rose Theatre’s stage adaptation of her novel Persuasion she would, artistic director Chris Haydon suggests, have thought it “awesome”. She’d certainly have been bemused by signs outside the auditorium warning of strong language; probably racking her brain to recall any effing or blinding. Yet ‘awesome’ is an

Were Jane Austen to have sat through the Rose Theatre’s stage adaptation of her novel Persuasion she would, artistic director Chris Haydon suggests, have thought it “awesome”.
She’d certainly have been bemused by signs outside the auditorium warning of strong language; probably racking her brain to recall any effing or blinding. 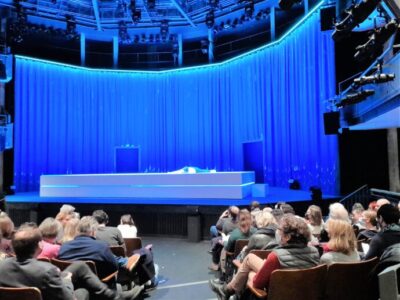 Yet ‘awesome’ is an apt description of this ebullient production, with Sasha Frost and Fred Fergus (pictured) taking the lead roles of Anne Elliot and Capt Wentworth in a story lampooning Georgian society’s pressure on girls to marry by their early 20s, or risk being dubbed ‘old maids’. The ‘persuasion’ of the title is unmarried Austen’s dig at that coercion.
First staged five years ago at the Royal Exchange, Manchester (Kingston’s version has been Covid-delayed), the show is a vibrant blend of book adaptation, musical and dance spectacular, set against plain floor-to-ceiling blue curtains and using a huge two-tiered rectangular revolving stage, dramatically thrusting the characters above the front row of the stalls. 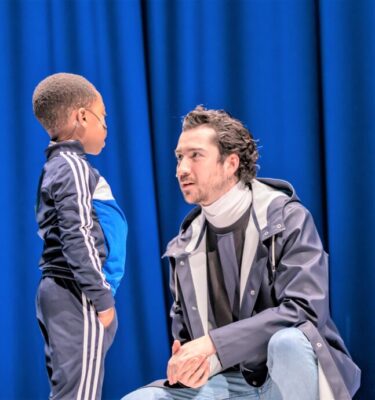 Kingston schoolboy Daniel Aiden Matembe and Fred Fergus in Persuasion. Pictures by The Other Richard

Director Jeff James and choreographer Morgann Runacre-Temple energise a passionate cast which includes professional debutants Matilda Bailes and Adam Deary… and pint-sized Kingston schoolboy Daniel Aiden Matembe – one of three alternating local lads in the production.
While the novel, written just after the Battle of Waterloo but published posthumously, harks back to the social conventions of a long-gone era, there is plenty of comedy to be had from a modern audience’s interpretation of the conversations.
All plays are seen in the context of the time they are performed, and when the press night audience was informed that the careers of sea captains Wentworth and Benwick, and that of Admiral Croft (Emilio Doorgasingh), were fraught with hazard because “we could have war”, there was a collective intake of breath as everyone’s thoughts suddenly returned to the reality of Ukraine’s invasion. 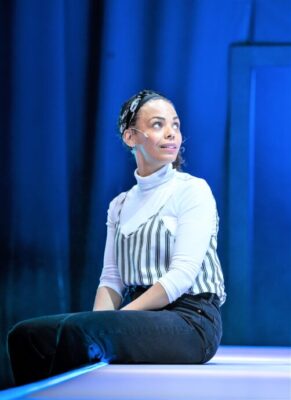 Sasha Frost is simply splendid in Persuasion at the Rose. Pic: The Other Richard

Frost and Fergus portray Anne and Wentworth as complex characters, living with doubts and uncertainties, and revealing glimpses of tender and fragile inner selves. By achieving those mixed feelings so convincingly, they underpin the entire show.
Seldom has the Rose Theatre’s lozenge shape been used as effectively. Unencumbered by scenery, the show makes extra use of lighting (Lucy Carter) and sound (Ben & Max Ringham) to build mood and atmosphere, with an extraordinary depiction of frolics at the seaside created by dispensing billows of foam from an overhead special effects machine, and having the cast change into swimwear to jump around in it. Marvellous high jinks!
It required a small army of backstage staff to hoover, dry and clean the foam away in an extended interval.
Grace Cookey-Gam plays Mrs Croft and Helen Cripps is Mary, while Dorian Simpson and Caroline Moroney are the cast members most familiar with the show as Charles and Henrietta, having been in the original Manchester production. Moroney and Bailes (Louisa) formed an excellent dance double act. 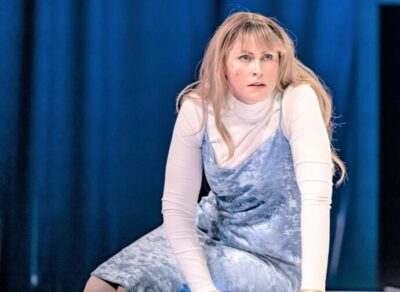 Caroline Moroney was in the original 2017 production in Manchester. Pic: The Other Richard

All in all, it’s a riotous romp – a rich modern reimaging of a story which echoes Jane Austen’s own experiences, but cleverly blurs time and space by using contemporary costumes and an up-to-date soundtrack.
You can book at: https://www.rosetheatre.org/whats-on/persuasion
After Kingston’s run ends on March 19, the production moves lock, stock and barrel to Alexandra Palace and then on to the Oxford Playhouse.