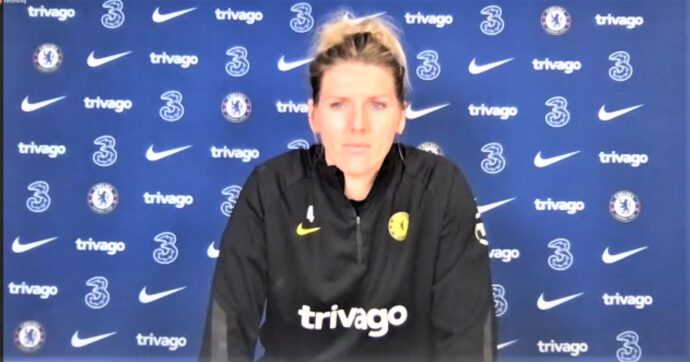 Chelsea Women face Man City today in the final of the Conti Cup. at Wimbledon’s new Plough Lane stadium, while the men are in Burnley, facing a resurgent Clarets side that will fancy their chances against a backdrop of ownership turmoil in SW6. Acting captain Millie Bright, pictured, may have to hand over the armband

Chelsea Women face Man City today in the final of the Conti Cup. at Wimbledon’s new Plough Lane stadium, while the men are in Burnley, facing a resurgent Clarets side that will fancy their chances against a backdrop of ownership turmoil in SW6.

Acting captain Millie Bright, pictured, may have to hand over the armband to club captain Magda Eriksson, now fit again after a string of false starts because of prolonged injury.

“Our aim is to give the fans a good game and, ultimately, win the cup and bring it home,” Bright said in the pre-match press conference, adding that all the players had rallied round Russian signing Alsu Abdullina. “We treat each other like family and support each other; that’s the same, regardless of the situation,” she said.

Chelsea fans, players and staff are wondering how the post-Roman Abramovich era will look now that the Russian oligarch has decided to sell.

Petr Cech, the go-between who passes on messages from the board to the players, visited Cobham during the week to give pep talks to staff and footballers, reassuring them that everything remained the same and that their salaries would be paid, despite the upheaval.

Both men’s and women’s managers have stated that there is no reason the Blues’ phenomenal successes of the past two decades shouldn’t continue… but, understandably, neither wants to be drawn deeper into commenting on the war in Ukraine.

“I’m a football manager, and all of my focus and attention has been on that,” said Hayes. “There’s a war going on, and it’s a really difficult time. It’s amazing how everyone’s come together to support a horrendous situation in Ukraine. It’s difficult for us all to go about our daily lives without thinking about it.”

Each manager has said that their respective teams are concentrating on football while, at a human level, having every sympathy for the suffering of the Ukrainian people.

Hayes has denied there is any ‘home advantage’ to be playing just up the road at Wimbledon, insisting she has never been to the new ground, though admitting that years ago she stood, as a fan, on the old Plough Lane terracing.

The match is sold out, and is live on the BBC at 5.15pm, ensuring a huge audience. 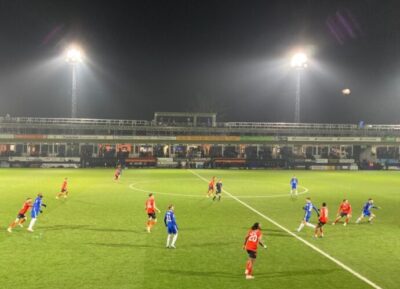 Chelsea men just shaded it against Luton in midweek, and will now face Boro in the quarter-finals

The Blues men’s reward for finally edging ahead of Luton Town at Kenilworth Road in the 5th round of the FA Cup on Wednesday night was a trip to Middlesbrough’s Riverside stadium in the quarter-finals, after Boro knocked Spurs out of football’s oldest cup competition.