Red card meant there was only going to be one winner 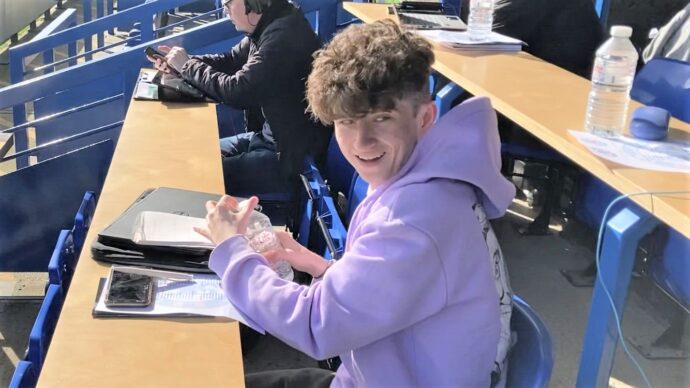 Hollyfield student HARRY CASTLE (that’s him above) was at the recent Chelsea Women v Leicester City Women match at Kingsmeadow, in the press box, writing his first match report as he aims for a career in sports journalism. Here it is…       The game started with Chelsea Women the clear favourites to beat

Hollyfield student HARRY CASTLE (that’s him above) was at the recent Chelsea Women v Leicester City Women match at Kingsmeadow, in the press box, writing his first match report as he aims for a career in sports journalism. Here it is…

The game started with Chelsea Women the clear favourites to beat Leicester City at Kingsmeadow, as the defending champions of England.

However, it was Leicester who had the better start. Within the first two minutes, Freya Gregory was causing Naimh Charles problems down Chelsea’s right side, with the first chance of the game going just wide of Ann-Katrin Berger’s goal.

Gregory continued to cause problems for Chelsea’s full back all game, and in the 11th minute won Leicester’s first corner, which was headed just over the bar by Georgia Brougham.

The first 15 minutes were dominated by Leicester, up until the moment Sophie Howard got a straight red for a challenge that was deemed to be high on Jonna Andersson.

From that moment on, the game was Chelsea’s to lose. Eight minutes later, Pernille Harder’s left-footed effort found the bottom right corner of the Leicester net after she was played through by Sophie Ingle.

Twelve minutes after Chelsea had taken the lead, Harder doubled her tally for the day, finishing off a lovely Chelsea move. The ball was played in from the left side of the box by Sam Kerr, and Harder couldn’t miss. 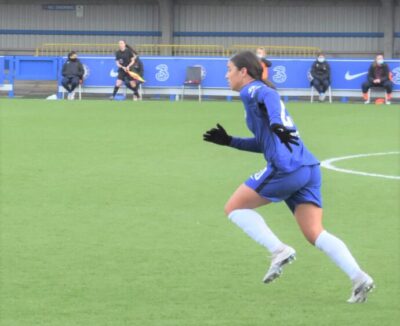 The half ended with Chelsea two to the good. The Blues started the second half as they’d ended the first, with Kerr forcing a save out of Demi Lambourne in the 48th minute.

Kerr made it three goals for Chelsea shortly afterwards, winning possession back on the halfway line and playing a one-two with Harder, who sent her through with a lovely ball. Kerr, from the left side of the box, found the bottom right corner with a tidy finish, using the outside of her right boot.

Five minutes later, Ji So-Yun opened her account for the afternoon after she controlled the ball from a Fran Kirby corner, and caressed it into the far right corner, putting the Blues 4-0 up.

Chelsea were on a demolition job, and showed no signs of slowing down after Aniek Nouwen headed in their fifth, following Harder heading the ball back across the six-yard box from a Millie Bright cross from the right. 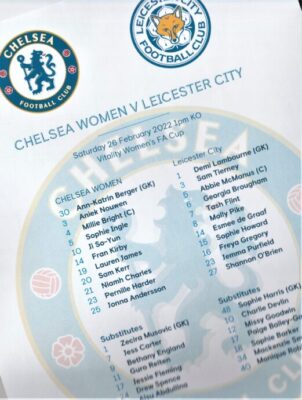 In the same minute, Harder was denied her hat-trick by Lambourne, after Chelsea’s No23 shot straight at her. Chelsea made it seven, however, after sub Beth England headed home a delightful Charles cross from the right side of the box.

In the final minute of the game, Kerr was denied by Lambourne; her headed effort saved, as Chelsea missed the chance to go eight up.

After the red card, there was only ever one winner, Chelsea had their foot on the gas and never intended to take it off.