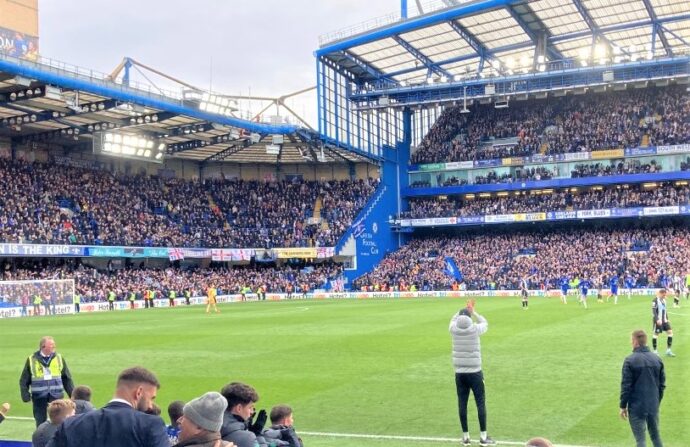 Blues manager Thomas Tuchel applauds his players, whose persistence was rewarded with a last-gasp winner at the Bridge, where in-form Newcastle were the visitors. And it was the same story for Emma Hayes and Chelsea Women, hosting Aston Villa at Kingsmeadow at the same time on Sunday, where a late goal from Sam Kerr snatched

Blues manager Thomas Tuchel applauds his players, whose persistence was rewarded with a last-gasp winner at the Bridge, where in-form Newcastle were the visitors.

And it was the same story for Emma Hayes and Chelsea Women, hosting Aston Villa at Kingsmeadow at the same time on Sunday, where a late goal from Sam Kerr snatched the points and kept up the pressure at the top of the Women’s Super League, with the manager claiming that it felt as if “everyone is against us right now”.

At Stamford Bridge it looked as if it was going to be one of those frustrating afternoons in the 2pm kick-off game, with Newcastle’s noisy fans coming up with inventive chants to rub in the fact that CFC is up for sale. 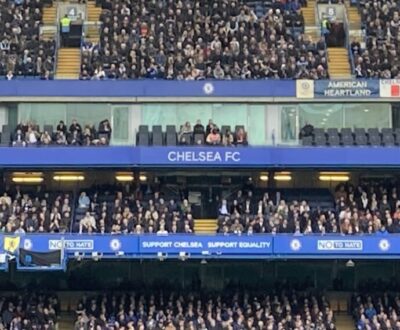 There were eight people in Roman Abramovich’s box for the Newcastle game – it’s the one just above the words Chelsea FC. The six adults and two youngsters were being minded by a security guard on duty a couple of seats away

With no programmes on sale to the general public, and a slightly subdued feeling enveloping the Bridge after a chaotic week in the club’s history, it was a fairly even goalless first half. The only notable action was Kai Havertz’s booking in the 39th minute, for supposedly elbowing 6ft 7in Dan Burn. It seemed surprising that ref David Coote even thought he could reach.

A flurry of bookings followed in the second half as frustration began to show on both sides… and in the technical area where Tuchel had a short slanging match with Newcastle’s assistant manager, Jason Tindall. 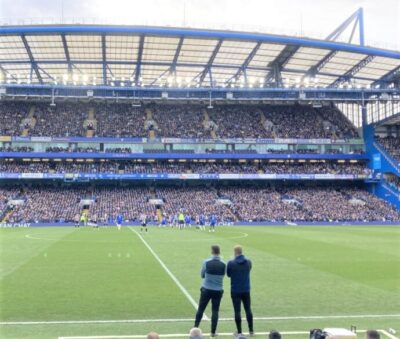 But with Romelu Lukaku replacing Timo Werner on 63 minutes, the Toon goal was under siege in the dying minutes. Just before the finish of normal time, captain Jorginho sent a ball forward, and Havertz controlled it and then fired home, to silence the noisy black-and-white fans.

Havertz almost doubled it in the third of four minutes of stoppage time, with keeper Martin Dubravka tipping his shot on to the bar.

Newcastle had tried to play for a draw, but the Blues’ determination after a tricky and distracting off-the-field week saw them home.

Meanwhile at Kingsmeadow, Chelsea Women managed a similar late, late winner against a spirited Aston Villa, languishing near the foot of the WSL, reports Jane Grove.

The visitors put up a strong showing – especially in defence – with Hannah Hampton performing heroics in goal and repeatedly denying headed attempts by Blues striker Sam Kerr – only to fall at the last to her boot.

The winner was two minutes into stoppage time, ensuring that Chelsea, who had numerous unconverted chances, keep up the pressure on table-toppers Arsenal.

“Arsenal Women, we’re coming for you,” chanted the Blue Army, who were in fine voice among a 2,655-strong crowd, ecstatic to see Kerr’s 50th goal for the club hit the back of the net. Ref Abi Byrne booked Kerr in the dying moments for celebrating by whipping off her top and whirling her shirt around her head in the style of a young Ryan Giggs.

“After the week we’d just had, we had a hatful of chances but just couldn’t convert… so you win championships when you win games like that,” said Emma Hayes afterwards. “There was amazing spirit and camaraderie among the players.

“Everybody’s against us right now, and that’s giving us strength… knowing that we’ve got each other and that everyone has contributed to the win today.”

Villa manager Carla Ward said her team were gutted, and said the goal was “like that moment when you discover you’ve been cheated on”!

She said that her players deserved a point from the game, and added her praise for Hampton for her impressive goalkeeping performance.

Chelsea travel to Everton in midweek before hosting Birmingham City on Sunday in the quarter-final of the Women’s FA Cup, with – hopefully – Fran Kirby back in contention for a place after a prolonged absence.