Beth’s back as Blues hit 9 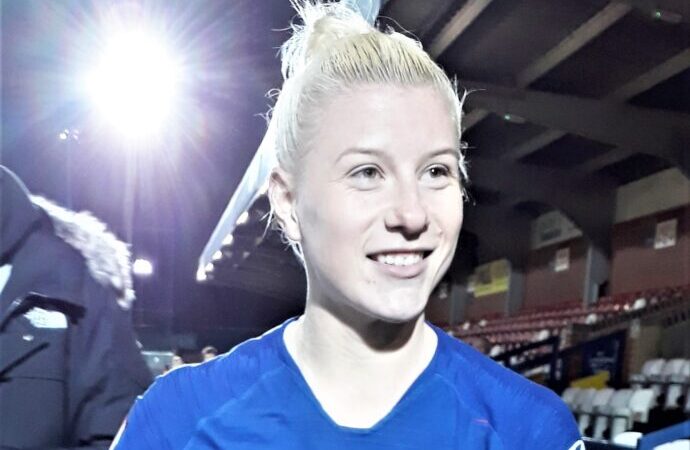 Beth England (pictured) is back on form as Chelsea Women shot to the top of the league with an overwhelming 9-0 away win at Leicester. In a remarkably one-sided match, the Blues were 3-0 up in just seven minutes, then refused to take their foot off the gas as they pummelled the Foxes and leapfrogged

Beth England (pictured) is back on form as Chelsea Women shot to the top of the league with an overwhelming 9-0 away win at Leicester.

In a remarkably one-sided match, the Blues were 3-0 up in just seven minutes, then refused to take their foot off the gas as they pummelled the Foxes and leapfrogged Arsenal to reach the top of the Women’s Super League for the first time this season, achieving a huge boost to their goal difference as they did so.

Chelsea now play Reading at Kingsmeadow on Sunday, attempting to cement their top spot. It’s an evening game with kick-off at 6.45pm… and the FA and the government have partially relented on the post-Abramovich sanctions affecting the club, so tickets are once again on sale for the match.

In a nutshell, if the Blues win their remaining five league matches they will retain the title for a third consecutive year, irrespective of Arsenal’s results.

The five are: Reading (h), Spurs (a), Birmingham (a), Man U (h) and a yet-to-be-rearranged match against Tottenham at Kingsmeadow – the one postponed from last week after a north London Covid outbreak.

Quickfire goals from Guro Reiten, Sam Kerr and England set the tone at the King Power on Sunday afternoon, with Aniek Nouwen adding a fourth before England, Reiten and Kerr each completed braces. Subs Lauren James and Jessie Fleming scored in the dying moments to make it 9-0. A rare starting front pairing of Kerr and England worked well.

Emma Hayes was chuffed. “Our execution and game plan was first class,” she said. “Everybody had a good game, including those [coming on] from the bench. It was relentless, ruthless and consistent throughout the whole 90 minutes – that’s the most pleasing thing.”

She said that the squad’s depth – now that most of the long-term injured, bar Fran Kirby, were fit again – held the key to the remainder of the season.

“Depth drives the standards in training every day, and we’re seeing it in games. The fact that we’re without Fran, without Pernille [Harder] and still have the depth to compete like we are is a real testament to the whole group.”

Lauren James finally broke her scoring duck for the Blues, having arrived from Manchester United last summer and been nursed to full match fitness by Hayes. “I’ve made no secret of the time we’ve taken to get her to that place,” added the manager. “There’s a reason for it, and perfect timing to get her first goal. It was a superb cameo from her when she came into the game.”

Summing up the task facing Chelsea over the next two months, Hayes added: “We win every game, we win the title. That’s it!”