Blues maintain the race to glory 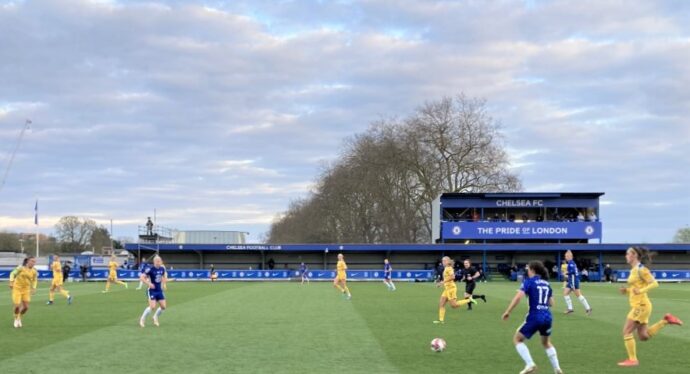 Chelsea Women hung on to top spot in the Women’s Super League with an impressive 5-0 victory at a chilly Kingsmeadow, with both Beth England and Sam Kerr scoring twice. England’s second came via a well-struck penalty in stoppage time… although Kerr was still on the pitch and could have tried to pinch the ball

Chelsea Women hung on to top spot in the Women’s Super League with an impressive 5-0 victory at a chilly Kingsmeadow, with both Beth England and Sam Kerr scoring twice.

England’s second came via a well-struck penalty in stoppage time… although Kerr was still on the pitch and could have tried to pinch the ball to net a hat-trick. The fact that she didn’t insist on upsetting the game plan showed, said manager Emma Hayes, the level of professionalism in the team. “She put the team first,” said the gaffer.

The Sunday night win keeps the Blues in pole position as an international break approaches, but it took Chelsea 40 minutes to make the breakthrough against a resolute Reading side who flung bodies on the line to deny the champions. 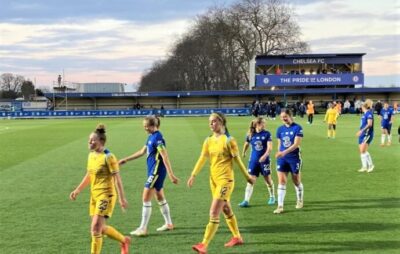 “We had to grind them down,” said Hayes. “Reading worked well off the ball. It was 18 passes and four switches of play to get the first goal, and I thought we had to do more of that, but it was a nice finish from Jessie Fleming.”

In the changing room at half-time Hayes told winger Guro Reiten that her crossing needed to be better, and the gifted No11 – player of the match for many – obliged by creating goals two, three and four, with England netting her first on 52 minutes with a wallop of a strike.

Reiten darted into the Reading area on 66 minutes – a penetrating run which allowed her to tee up Kerr. Same again 12 minutes later, with Reiten once more providing the ideal pass for the Aussie markswoman.

A slew of late substitutions gave some useful game time to Maren Mjelde, among others, but it was a clumsy challenge in the box that allowed England to score her second from the spot in the first minute of injury time.

“I thought we were outstanding, especially in the second half. I think we’ve been superb in the last eight to 10 games, controlling the game better. Opponents are creating less against us, so – yes – I’m pleased,” said Hayes.

The Blues manager said that the team had put all the off-field noise about the club’s sale out of their minds and simply focused on football. “We haven’t really been affected internally; nothing has changed,” she said.

A crowd of 2,485 watched the game at Kingsmeadow as the temperature steadily plunged. Erin Cuthbert and Jessie Fleming both had good games, but it was Reiten who displayed the passion and energy that eventually proved key to securing a comfortable win… and yet another clean sheet, setting a new WSL record in the process.

England’s return to scoring form comes at an important time for guaranteeing her place in the national squad. The belief is returning, and it’s energising the players around her as well. 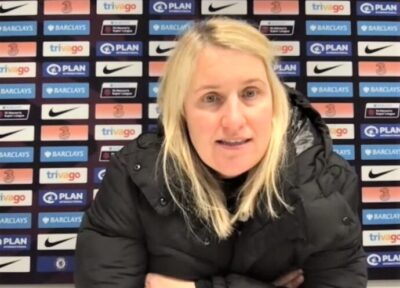 Ji So-Yun was missing from the squad with Covid, Lauren James has a soreness in her groin with she and Pernille Harder watching from the stand as she gets over a knee knock. There was no sign of Fran Kirby at Kingsmeadow as fears grow that her unexplained tiredness might mean she plays no further role in the current season.