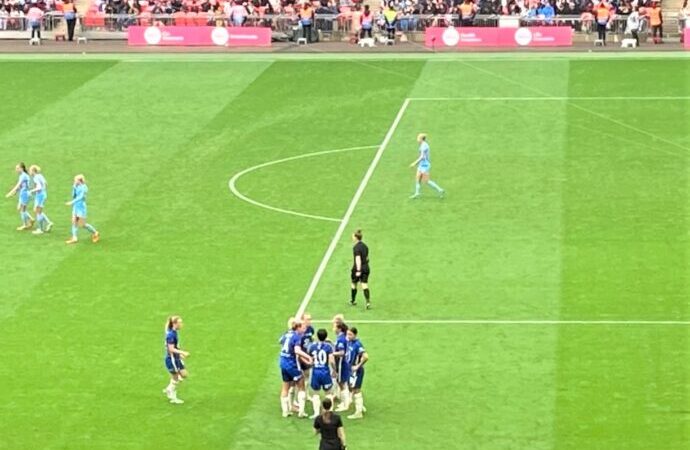 At times it was desperate as Chelsea’s battling women clung on, exhausted, in the final moments of this year’s Women’s FA Cup final at Wembley. But cling on they did, and captain Magda Eriksson proudly lifted the trophy as the Blues notched up the cup and league double after a surreal season. All the off-field

At times it was desperate as Chelsea’s battling women clung on, exhausted, in the final moments of this year’s Women’s FA Cup final at Wembley. But cling on they did, and captain Magda Eriksson proudly lifted the trophy as the Blues notched up the cup and league double after a surreal season.

All the off-field noise about the club’s ownership was put behind them as they achieved a 3-2 victory over Manchester City at Wembley, although they needed extra time, and every ounce of energy they could muster, to do it. 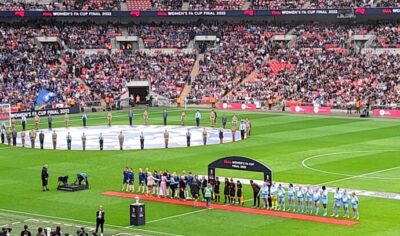 It boosted the mood of Blues fans after Chelsea’s men were defeated on penalties in their FA Cup by Liverpool the day before, and it avenged the women’s Conti Cup final result on March 5 at Wimbledon when City won 3-1.

“I’m so happy,” chirped manager Emma Hayes as her team rounded off the season with the club’s fourth FA Cup trophy. “That was so amazing for the women’s game today; two teams that respect the crap out of each other going toe to toe! Us taking the lead, them equalising, then finding a winner. It was so gutsy.”

She predicted that this Chelsea team will now go down in history. “I will look back in 10 years’ time and I’ll be like ‘That group was immense, the best team I’ve ever coached’,” she added. And the old gang is splitting up. Ji So-Yun, who came on as a sub in the game, and then was herself subbed, is leaving. As is unused substitute Drew Spence and left back Jonna Andersson, brought on at the start of extra time to add some pace down the flank. 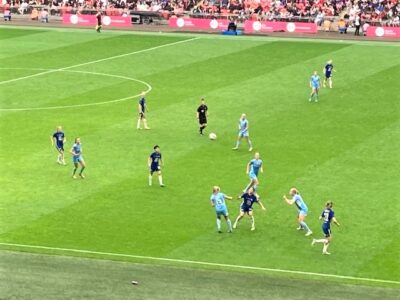 It was a tense and tight affair, and it could easily have gone the way of Gareth Taylor’s sky blues who dominated large sections of the match. Indeed, it was against the run of play when, after 33 minutes, Millie Bright floated in a looping cross from the right and Sam Kerr applied the header to open the scoring.

Nine minutes later it was 1-1 after Lauren Hemp – the one opposition player that Hayes yearns to sign – jinked past Bright and fired home past Ann-Katrin Berger.

The second half was 18 minutes old when Erin Cuthbert, named player of the match, made it 2-1 to Chelsea with a worldy – rocketing a shot from outside the box against the underside of the crossbar and over City keeper Ellie Roebuck’s flailing fingertips.

That seemed to be that. Chelsea held on and held on until, as the Wembley stadium digital scoreboard clicked over to 88 minutes and 24 seconds, City sub Hayley Raso outmuscled the tiring Eriksson and fired into the Chelsea net in front of the Manchester supporters in the 49,094-strong crowd, setting a new record to beat the 2018 tally of 45,423 who watched Chelsea defeat Arsenal (though there is puzzlement that 55,000 tickets were sold and 6,000 fans simply didn’t materialise). 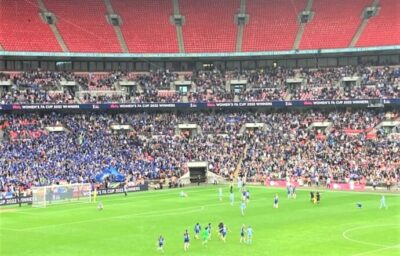 Extra time saw Hayes make more tweaks to her side, with five subs eventually used to replace weary legs. Nine minutes into the additional half hour, Kerr scored her second, although the shot took a cruel deflection off the studs of City captain Alex Greenwood’s outstretched boot.

By the time the stadium PA was playing Madness’s anthem One Step Beyond after ref Kirsty Dowle had blown the final whistle, both sides were dead on their feet.

With the Women’s Euros to come this summer, there’s little rest for the wicked. Hayes will hope that the ownership issues are swiftly resolved, allowing her to strengthen a squad that seems likely to be reduced in strength and depth by departures.