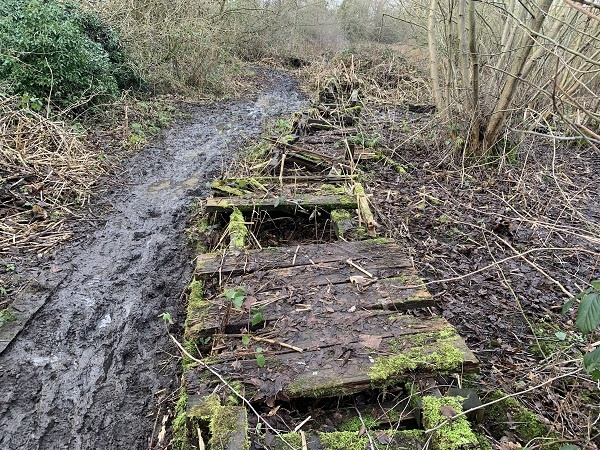 I doubt there will be much room for The Drifters to get out a blanket and sit under a boardwalk like this one pictured below, but they could always enjoy walking along it instead. Kingston Council has agreed to fund a replacement boardwalk for Six Acre Meadow near the Sunray Estate in Tolworth off Knollmead.

I doubt there will be much room for The Drifters to get out a blanket and sit under a boardwalk like this one pictured below, but they could always enjoy walking along it instead. 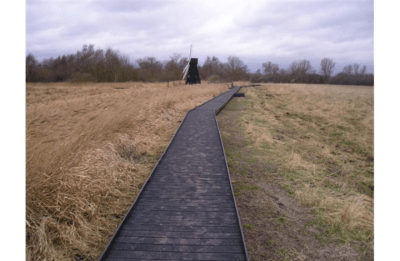 Kingston Council has agreed to fund a replacement boardwalk for Six Acre Meadow near the Sunray Estate in Tolworth off Knollmead.

The borough’s oldest hay meadow provides a habitat for a wealth of pollinator species including butterflies, bumblebees and hoverflies. The meadow is also of particular cultural importance: it is the location in which Pre-Raphaelite painter Sir John Everett Millais created his renowned Ophelia in 1851, a work of art which featured the Hogsmill River which runs along its eastern boundary.

Elliot said access to the site had become limited – especially in winter months – because of the decay of the boardwalk (pictured top). Himalayan Balsam, an invasive plant which could have been tamed by conservation volunteers, had run rampant in the area which had previously hosted the best population of Meadowsweets – a fragrant plant with frothy clusters of cream flowers on long stems  –  in the borough.

Fewer people being able to use the woodland trail had also resulted in anti-social behaviour and littering, said Elliot.

The £13,500 needed to do the work – which comes from the council’s planning application fees pot – will go to replace the rotting wooden structure with one made of recycled plastic, a proven material that is commonly used in publicly accessible greenspaces as it does not degrade and requires minimal maintenance. It will be wheelchair-friendly and maintained to a good standard by volunteers who would be working to improve the biodiversity at the site.

The boardwalk would also improve better access to the area for the children at the nearby Liberty Woodland forest school, said Elliot.

“The length of the boardwalk will be 65 metres and is part of a circular route which would enable people to explore the nature that is in that site. Being an elevated boardwalk obviously the footfall won’t have the environmental impact that it would if you were walking on the soil itself,” said Elliot.

Elliot hopes the work, once started, will be completed within a month and finish before the bird nesting season.

“The case that I hear from residents is twofold; that they would like to use the space more – particularly families – they want a safe place to walk, so this boardwalk will provide that, and the second thing is we know it is a place where there has been a lot of anti-social behaviour, not so much at the moment but in the past, so having more people walking past and having it less as a deserted spot in the borough would be really good at helping to solve that problem as well.”

Green councillor Sharron Sumner, who also represents Alexandra ward, described Six Acre Meadow as beautiful and said it was one of her favourite places in the entire borough. She said she had small concerns about the sensitivity of the area as “biodiversity likes quiet” but she did recognise that there were children who needed access to the space as well so she really hoped a balance could be achieved.

“We’ve also got the ramblers’ association as well. They complained months and months ago that the bridges and the boardwalk were rotten so they will be pleased that this is actually happening,” she added.